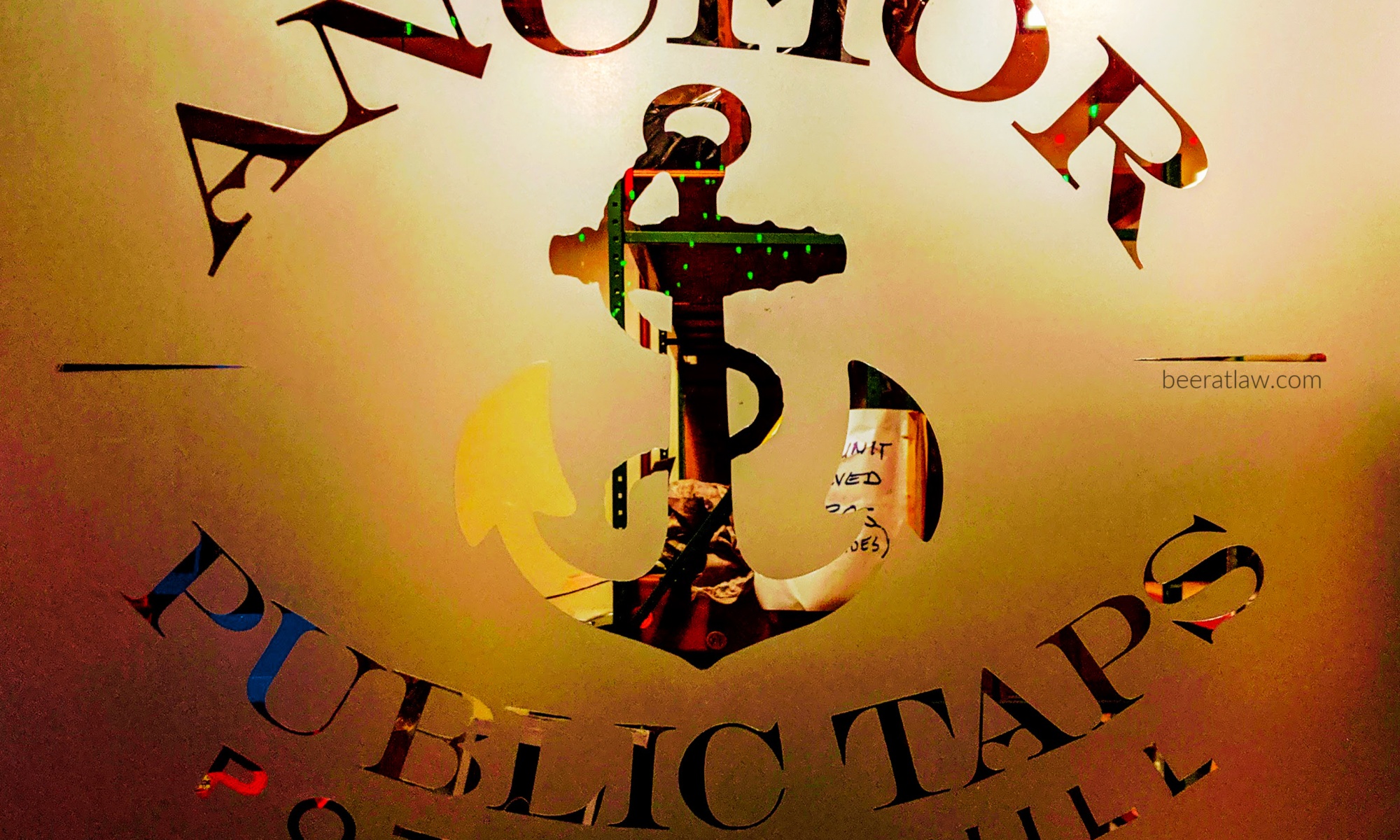 Ladies and Gentleman of the Jury, today we bring you the case of Anchor Brewing Company.

Ladies and Gentleman of the Jury, today we bring you the case of Anchor Brewing Company. Anchor Brewing Company is the oldest brewery in San Francisco, founded in 1896 by Ernst F. Baruth and his son-in-law Otto Schinkel, Jr. (wait, what? in-laws?). Although most visitors won’t know it, Anchor is the epitome of a historical survivor. The brewery burned down twice – once during the 1906 earthquake and once right after the end of Prohibition (talk about bad luck). It then nearly went out of business twice before being purchased by the “Godfather of Modern Microbrewing,” Fritz Maytag III, who turned the place into the first modern microbrewery.

Because Anchor never technically went out of business, it gets to relate its age back to the initial founding and is considered the first “craft” brewery in the United States. Located in the Portrero Hill neighborhood since 1979, Anchor has an active brewery with daily tours and a “Public Taps” brewpub just across the street open every day (we went to the public taps).

First off, it’s a surprisingly large space. We’re talking a whole warehouse plus a large patio space plus a loading dock that doubles as a gaming area large; and really well-laid out. The main warehouse has plenty of family-style tables set up between the bar and the giant projection screen/indoor gaming area.

The single long bar provides plenty of room to let everyone in that wants in and the staff is happy to help make recommendations based on even general preferences. No beer-prep course required. So, basically the opposite of the actual bar.

Second, the outdoor area is also sizable, with high and low-top tables in the upper patio outside the warehouse and an open area below (basically a dual-use loading dock/parking lot) with a few more tables and a couple cornhole set-ups.

Finally, and this is a case-making piece of evidence, Anchor Brewing’s Public Taps are both family and dog-friendly (sorry, cat people, don’t @ me). This local rule will definitely impact your view of Anchor Brewing, for better or worse, but this decision had a positive impact on the jury here.

Now I know what you may be thinking: Where’s the Anchor Steam? Why did you not try Anchor Steam, the flagship beer of Anchor Brewing? What kind of non-offer summer associate nonsense is that??? Because (1) you can get that just about anywhere and (2) we couldn’t pass up the unique offerings only sold at the Public Taps. I guess that’s really one reason with two elements, but only true gunners will care. Anyway, on to the witnesses…

Deuce Deuce (Imperial IPA) – Objection: lacks foundation. Surprisingly well-balanced for a double IPA. Not overly-alcoholic or trying too hard with the hops. Flavor and aroma don’t linger quite long enough for a perfect experience, but definitely a must-try if you’re a hops person. Objection Overruled.

Golden Swaportunity Ale (American-Style IPA) – Objection: assumes hops not in evidence. Basically, an IPA for people who don’t like IPAs. Great aromatics and flash up-front, but weak substance and a total lack of hops on the palate. It’s an IPA if Justin Bieber were appointed to judge the quality of IPAs. Would not recommend, but it’s important to experiment and we respected the effort. Objection Sustained.

Winter Wheat (Winter Ale) – Objection: undue prejudice. This one’s a mindbender. Dark, yet light. Rather impressive blend of initial darkness followed by bright wheat notes. If you could brew and bottle a PI defense attorney that also did pro bono adoption work, this would be the beer you’d get. Easily the best we tried and potentially the best dark wheat we’ve ever experienced. It may taint the jury when it comes to the other beers, but the prejudice is due. Objection Overruled.

Merry Christmas & Happy New Year Ale (2019 Winter Warmer Ale) – Objection: beersay. Thick and reasonably spiced, but not quite as much as I’d like. It’s basically a generic porter with an out-of-court statement hinting of winter-themed spices. Could use some more first-hand infusion of the traditional “warmer ale” spices, but there’s no doubt it is an honest and trustworthy winter ale. Objection Overruled.

There were only three bad facts in this whole brewery case, but they must be admitted nonetheless.

First, because Anchor Brewing is in the Portrero Hill neighborhood, it’s a very quiet neighborhood and a bit awkward to get there. Compared to tap rooms like Standard Deviant Brewing in Northern Mission/Mission Dolores or Zilker Brewing in East Austin, there’s just not much happening right around Anchor Brewing. That said, it’s only a 10-minute walk to music venues and about 20 minutes to get to the Chase Center (go Warriors?) and its surrounding nightlife. But for those people looking to make this only one stop during an evening out, the location lacks the before & after options of other brewery tap houses in denser nightlife districts.

Second, there is no food on site. Well, technically you can buy some prepackaged, overpriced snack mix, hidden next to the brewery swag, but nothing substantial.

In fairness and as a partial rebuttal, Anchor Brewing has a work around. You are permitted to bring in any food you want and can even have something delivered if you meet the delivery out front. That said, a significant number of breweries with official tap rooms have food nowadays, so it’s a slight negative.

Third, and this is that double-edged sword from before, the KIDS and the DOGS. If you’re not a kid person, or are coming on date night (we see you and we accept you), you can avoid little ones by waiting to come until later, as children are not allowed to enter after 7:30 pm. But if you’re anti-dog (who hurt you?), there’s not really a solution. Dogs are allowed in the Public Taps at all times, so be prepared if you have allergies or phobias.

The evidence was overwhelming that this brewery and public taps is a must-try for anyone who likes games, beer, and people who like games and beer. While there are some small issues if you’re looking for reasons to not enjoy yourself (I’m looking at you, insurance defense practitioners), the evidence proves it’s worth a visit and skipping this establishment means missing out.

4 out of 5 beer gavels. Court is adjourned.

This site uses Akismet to reduce spam. Learn how your comment data is processed.